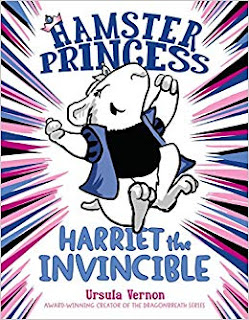 Harriet Hamsterbone is not a typical princess. She may be quite stunning in the rodent realm, but she is not so great at trailing around the palace looking lovely or sighing a lot.
The truth is, Harriet finds the royal life rather dull.

One day, though, Harriet's parents tell her of the curse that a rat placed on her at birth,
dooming her to prick her finger on a hamster wheel when she's 12 and fall into a deep sleep.

For Harriet, this is the most wonderful news ever because it means she's invincible until she is 12! After all, no good curse goes to waste. And so begins a grand life of adventure with her trusty riding quail, Mumfrey, until her twelfth birthday arrives and the curse manifests in a most unexpected way.


Other Books in Hamster Princess Series

Princess Harriet has absolutely no interest in brushing her hair, singing duets with woodland animals, or any other typical princess activities. So when a fairy tells a very bored Harriet about twelve mice princesses who are cursed to dance all night long, she happily accepts the quest and sets off with a poncho of invisibility and her trusty battle quail. But when she arrives at the Mouse Kingdom, she discovers there’s more to the curse than meets the eye, and trying to help is dangerous business . . . even for a tough princess like Harriet.

Princess Harriet Hamsterbone does not like sitting around at home. How’s a princess supposed to have any fun when her parents are constantly reminding her to be careful and act princessly?
So when her pal Prince Wilbur needs help finding a stolen hydra egg, Harriet happily takes up the quest.  The thief’s trail leads them to a wicked witch and a tall tower, occupied by a rat whose
tail has more to it than meets the eye!

Princess Harriet Hamsterbone doesn’t go looking for trouble. She prefers to think of it as
looking for adventure. But when she climbs to the top of an enormous beanstalk and sneaks
into the castle at the top, Harriet finds plenty of both. The castle is home to one very poetically challenged giant rabbit with two unusual prisoners—a girl who is half harp, half hamster, and an extremely large goose. This calls for a heroic rescue, and Harriet is just the hamster for the job.

Princess Harriet Hamsterbone is not the kind of princess who enjoys fancy dresses or
extravagant parties. Cliff-diving, fractions, and whacking people with swords are more her thing.
So when she’s forced to attend a boring ball in honor of a visiting ambassador,
Harriet is less than thrilled–until a bewitchingly beautiful stranger arrives. Who is she?

And where did she come from? The mystery leads to a not-so-wicked stepsister,
an incontinent lizard, and a fairy’s spell that’s really more of a curse.
Luckily, Harriet knows a thing or two about curses…

Most monsters know better than to mess with Princess Harriet Hamsterbone.
She’s a fearsome warrior, an accomplished jouster, and is so convincing that she once
converted a beastly Ogrecat to vegetarianism.

So why would a pack of weasel-wolf monsters come to her for help?

Well, there’s something downright spooky going on in the forest where they live,
and it all centers around a mysterious girl in a red cape. No one knows better than
Harriet that little girls aren’t always sweet. Luckily there’s no problem too big or
bad for this princess to solve.


Writing about a new vocabulary word can help you understand the word.
1. Choose at least 10 words you do not know as you read this book.
2. Write the sentence from the novel that contains the vocabulary word and page number.
3. What is the definition of the word?
4. Can you use it in your own sentence?
5. Explain how the word connects to the story.
Make a MCBA vocabulary book of other words in this book and all the
other MCBA books you read.
Posted by Rose Magliozzi at 12:27 AM