The Blackthorn Key by Kevin Sands 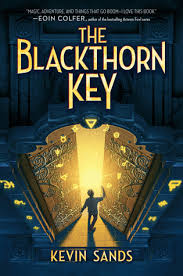 The Blackthorn Key (#1)
by
Kevin Sands


Following a series of murders, an apothecary's apprentice must solve puzzles and decipher codes in pursuit of a secret that could destroy the world in this suspenseful debut novel.
Christopher Rowe, apprentice to master apothecary Benedict Blackthorn, is learning all his master's secrets - like how to decipher complex codes and puzzles and how to transform simple ingredients into powerful medicines, potions, and weapons.
Christopher's beloved master guides him with a firm, steady hand - a confidence even more vital as Christopher learns of a mysterious cult preying on London's apothecaries. The murders grow closer and closer to Blackthorn's shop - until Christopher is torn from his home with only a cryptic message and a warning from his master: "Tell no one what I've given you".
Aided by his best friend, Tom, Christopher must race to decipher his master's message - and follow a trail of deceit toward an unearthly secret with the power to tear the world apart.


Following a series of murders, an apothecary’s apprentice must solve puzzles and decipher codes in pursuit of a secret that could destroy the world in Kevin Sands' suspenseful debut novel, 'The Blackthorn Key'.

Other books in the Blackthorn Key Series:

Christopher Rowe is back and there are more puzzles, riddles, and secrets to uncover.
The Black Death has returned to London, spreading disease and fear through town. A mysterious prophet predicts the city’s ultimate doom—until an unknown apothecary arrives with a cure that actually works. Christopher’s Blackthorn shop is chosen to prepare the remedy. But when an assassin threatens the apothecary’s life, Christopher and his faithful friend Tom are back to hunting down the truth, risking their lives to untangle the heart of a dark conspiracy.

And as the sickness strikes close to home, the stakes are higher than ever before…


Join host Becky Anderson as she talks to author Kevin Sands about his new book, Mark of the Plague.

Christopher Rowe is back and there are more puzzles, riddles, and secrets to uncover in this third novel of the award-winning Blackthorn Key series.

Wherever Christopher Rowe goes, adventure—and murder—follows. Even a chance to meet King Charles ends in a brush with an assassin.

All that’s recovered from the killer is a coded message with an ominous sign-off: more attempts are coming. So when Christopher’s code-breaking discovers the attack’s true target, he and his friends are ordered to Paris to investigate a centuries-old curse on the French throne. And when they learn an ancient treasure is promised to any assassin who succeeds, they realize the entire royal family is at stake—as well as their own lives.