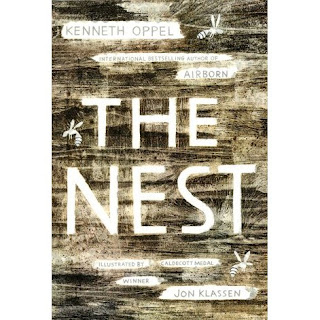 Steve just wants to save his baby brother—but what will he lose in the bargain?

For some kids summer is a sun-soaked season of fun. But for Steve, it’s just another season of worries. Worries about his sick newborn baby brother who is fighting to survive, worries about his parents who are struggling to cope, even worries about the wasp’s nest looming ominously from the eaves. So when a mysterious wasp queen invades his dreams, offering to “fix” the baby, Steve thinks his prayers have been answered.

All he has to do is say “Yes.” But “yes” is a powerful word. It is also a dangerous one. And once it is uttered, can it be taken back?

Read a Sample of the book.

Make a MCBA vocabulary book of other words in this book and all the
other MCBA books you read.
Reading Guide - (pdf)

Kenneth Oppel is the author of numerous books for young readers. His award-winning Silverwing trilogy has sold over a million copies worldwide, and been adapted as an animated TV series and stage play. Airborn was winner of a Michael L Printz Honor Book Award, and the Canadian Governor General's Award for Children's Literature; its sequel, Skybreaker, was a New York Times bestseller and was named Children's Novel of the Year by the London Times. He is also the author of Half Brother, This Dark Endeavor, The Boundless, and The Nest, winner of the CLA Book of the Year for Children. His latest book is the YA novel EVERY HIDDEN THING. Born on Vancouver Island, Oppel has lived in Nova Scotia, Newfoundland, England, Ireland, and now lives in Toronto with his wife and children.

Posted by Rose Magliozzi at 7:45 PM