Misadventures of the Family Fletcher by Dana Alison Levy 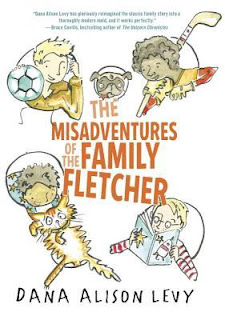 The Misadventures of the Family Fletcher
by
Dana Alison Levy

The start of the school year is not going as the Fletcher brothers hoped. Each boy finds his plans for success veering off in unexpected and sometimes diastrous directions. And at home, their miserable new neighbor complains about everything. As the year continues, the boys learn the hard and often hilarious lesson that sometimes what you least expect is what you come to care about the most.

Meet the Fletchers: four boys, two dads, and one new neighbor who just might ruin everything.

Sam, age 12
Mostly interested in soccer. And food. And his phone.

Jax, age 10
Psyched for fourth grade. Thinks the new neighbor stinks, and not just because of the skunk.

Eli, age 10 (but younger than Jax)
Delighted to be starting this year at the Pinnacle School, where everyone’s “the smart kid.”

Frog (not his real name), age 6
Wants his new friends at kindergarten to save a seat for his invisible cheetah.

Companion book to The Misadventures of the Family Fletcher.

The Fletchers are back on Rock Island, home of all their best summer memories. Romping in the surf, biking the windy shore roads, and catching crabs are just a few of the island’s delights. And best of all is the Rock Island Lighthouse, right next door and theirs to explore, year after year. But from their first day on the island it’s clear that this year, things have changed. And Sam, Jax, Eli, and Frog Fletcher can’t quite believe their eyes.

FIRST, a giant fence is blocking their beloved lighthouse, which has always been open to the public. Why is it closed? And what is the For Sale sign doing there?

SECOND, there are new neighbors, Valerie and Alex Gallindo. Kids next door might be okay, if they’re not totally annoying. But first impressions are not looking good…

Add a dose of Shakespeare, a very tippy kayak, a video camera, and (maybe, possibly, or not) a swimming cat, and the recipe for a crazy summer is complete. Sam, Jax, Eli, and Frog’s time on Rock Island is not at all what they expected. Can Rock Island remain the same, even with all these transformations? For the Fletcher boys, and even for Papa and Dad, the summer brings new changes, both in themselves and the island they love.

Posted by Rose Magliozzi at 8:00 PM